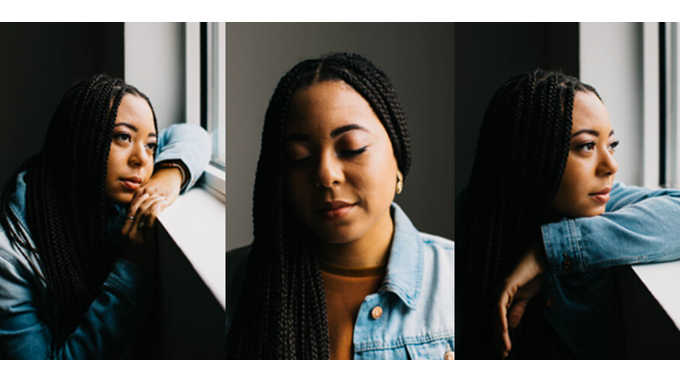 what do the words ‘so worth loving’ mean to you?

The words “So Worth Loving” bring to mind value and treasure. In life, the things worth anything are considered precious: time, material possessions, relationships, and those things I would never elect to live without. I would not have immediately assigned this to myself early on in my life, and sometimes even in my current season. To think that the mighty Creator of the sun, moon, skies, Earth, and everything beautiful could have deep affection for me is almost always overwhelming for me to comprehend or claim as true. It means to be enough, to be inherently and naturally a beneficiary of the highest level of care, devotion, and affection. It means to be singularly and fully chosen and called by name to receive the greatest gift that could ever be bestowed...unbridled and relentless love.

when you hear the words dark and light, what comes to mind?

I associate the terms dark and light with temperature and proximity to community. Darkness is cold, lonely, filled with isolation, and strikes the core of one’s being. It’s scary, yet also provides a false sense of security in being not seen and seemingly insignificant. There is no pressure to perform, little will to produce fruit, to press on, or to live. Darkness also provides the conditions to appreciate and recognize the necessity for light. This dichotomy is critical, because one cannot or would not exist without the ever-present reality of the other. Light is warm, enticing, alluring, promises something more, and inspires a communal spirit. Light is joy! It can also represent exposure and can initiate an exhausting and never-ending pursuit of excellence. It is a dance that never ends. To be seen in the light can be beautiful because it illuminates, shines, and sometimes even sparkles. Without recognizing our place in the light and relationship to the light, it becomes blinding and consuming. The light is also where we can find relief because we can see the invitation to community and belonging. There is an opportunity to recognize the fact that experiencing life alone is not the only way, there is another option. Light and dark were both created by God and He said both were “good”. When we understand the role of dark and light in our lives, we can choose a redeemed and balanced relationship with both and live life in abundance no matter the time of day or season.

did you find God in the middle of a dark season?

I absolutely found God in the middle of a dark season. My Dad served in the in the Navy for almost twenty-five years. I was born in Brunswick, Georgia, and raised in Norfolk, Virginia, Naples, Italy, and Okinawa, Japan. In November of 2003, my family moved back to Patterson, Georgia. I knew who God was, but did not have a personal relationship with Jesus. I was already in darkness. To compound this reality, I lost all of my community and friendships, faced the culture shock of systemic racism and colorism in school and in my community, and I was pressed to perform perfectly in all aspects of life as a student-athlete and young musician. I was miserable, angry, confused, and longed for relief, for warmth, for belonging, to bask in the light. In July of 2005, my youth pastor, Phillip Cochran, took our youth group to Powerlife Camp in Johnson City, Tennessee. He spoke to us about the importance of making a choice between truly following Jesus and letting go of all of the superficial junk or turning from Him and owning our decision instead of living double lives. My reality was that I was disrespectful to my parents, my little sister was afraid of me because of my temper and because I was walking rage, and yet I still claimed to be a follower of Jesus. I felt an undeniable jolt in my heart once the invitation was given to choose to follow Jesus not just with my words, but with my actions as well. This was when I found God in the middle of my dark season. I had no place to belong in life after being rejected by group after group in school, but I had finally found a home. I found the warmth, light, and was surprised to find community in the places I least expected.

what did you learn about His love for you at that time?

At this time, I learned that God’s love for me was not based on my performance, perfection, outward appearance, or the level of sin in my life. It was based on who He created me to be. God showed me that He fully knew every undesirable part of me, yet He STILL and DEEPLY loved all of me. He offered me something past acceptance. His love extended an invitation for healing, reconciliation, and restoration. I was able to take the love He poured into me and share it in all of the places my limited love fell short. My sister saw this life-change, and decided that if this God to could transform a monster like me, she wanted to surrender her life to Him too. We were baptized together and have fiercely loved, cared for, and championed each other relentlessly ever since. Our relationship is our combined testimony of God’s love first revealed to us a decade and a half ago.

what would you tell the next generation about God?

Generation Z is the most racially and ethnically diverse generation yet (born between 1999-2015). Young people are experiencing a time where they are forming ideas about social, environmental, political, and all other forms of justice at very young ages. This generation is composed of natural-born defenders, yet Jonathan Morrow from Impact 360 Institute and the Barna Group state that, “they are susceptible to whatever culture deems valuable, necessary, or true.” Culture has taught them that wielding power to get what they want is more important than truth. I would tell the next generation that God is a number of things, including love, light, and acceptance. More importantly though, God is the ONLY truth and His Word still remains relevant today. There is a battle waging for their hearts and it starts with how we see and identify with the truth of God’s love for us just the way we are. Fight for connection with God and others as reconcilers even when you don’t feel like it. It is an honor to come beside these fierce defenders and join hands as we fight together for God’s kingdom on Earth.