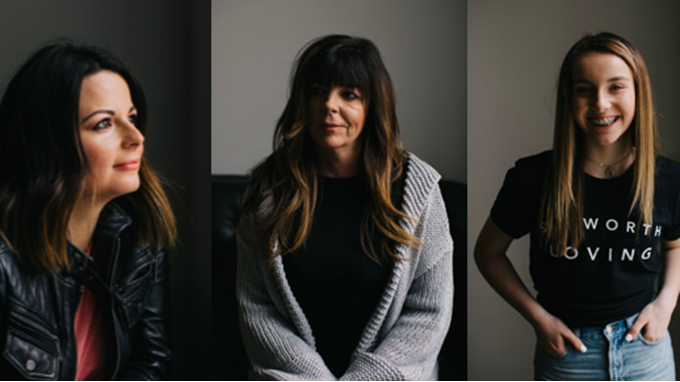 I’d like to share a little story of lives impacted by shame: my mother's and mine. As a hairdresser and founder of Shine Studio, this will give you reference to my passion to help other women see their God-given identity and be free from the effects of shame. Bronzer and contouring, lip gloss, and drugstore perfume...aqua net hairspray on a toothbrush for eyebrows to be perfectly arched. Lots of teasing and curls with a 1/2-inch iron, a duffle bag filled with heels, and neon cloth coming out of the top. I sat there and watched my mother prepare for work in the afternoon. Big brown eyes gazed in awe at her while she got ready. I was looking at her with love and adoration. Little did I know she would be looked at much differently in a few hours. She would pack up to go, and I would go into her makeup and begin to gander at all the things; wondering what they were for? Why she used a toothbrush for her eyebrows...with hairspray? A good ‘ole trick for the thick brows that were previously popular in the 1980s.

When I think back to those years, I remember those moments most. I believe that is when my passion for beauty began. My grandmother and her sisters were half Native American and they too had a love for teasing and hairspray. They never let their grey grow in, they always maintained the black hair color they inherited it from their daddy. My Uncle Arnold used to say that if any of them were run over by a tractor-trailer their hair would be perfectly intact. I would always give them makeovers, they would allow me to. I would scrummage through their makeup and hair products and they would always love what I did for them, or at least make me feel they did. It was so much fun to find their potential.

God sees us this way, He sees us at our potential.

Most of my life I was covered in shame. A girl who never knew her biological father I can say I was always in search of that unconditional love and a warm embrace. I was vulnerable to settle for whoever would show me that, even if just for a night. Not until I met my Heavenly Father was I able to release the desperate desire to settle on anything less than God’s best. A year of NO dating can sure do that for you! The men I was “with” were using me for their pleasure, and they had no idea where my desperation came from. I was so incredibly vulnerable and broken filled with shame. I would often wonder why...why am I here? I felt so much shame not just from my life currently, but also from my childhood.

My mother was also judged, ridiculed, and abused in ways that most people wouldn’t be able to survive. She herself, had layers of shame that most could not comprehend. Later in life, she told me that she would go to work, go straight to the bar and order a pitcher of beer and take a shot of Jim Beam before going to the dressing room to “get dressed to become undressed”. The men that tried her that night didn't know that they were looking at a woman who had lost her daddy in an explosion at the age of 11 and grew up with a widowed mother. They didn't know that a few years after this girl had lost her daddy, she had also lost her passion for gymnastics after almost losing her foot in a car wreck due to a shattered ankle. They didn't know that this young girl met a boy who would manipulate her into believing he was “Mr. Wonderful” only to begin beating her unrecognizable while she was pregnant with a little girl. Then he would force her into exotic dancing to make a living for them. Most people have judged my mother in her life...BUT...I believe that the way I looked at her when I was young as she got ready was the way God always looked at her and the way He looks at you and me.

My mother once told me the biggest mistake of her life was not finishing beauty school. That’s when God showed me what to do with my “skill of hairdressing”.

The double portion I have found is using the memory of my pain to lean into others that may also be hurting. Shame is obvious when you look for it in others. The double portion for my mother? Watching her daughter steward the same gifts she once had to offer a way for young women who have been in the sex industry. The generation the enemy tried to destroy is using his own tactics to fight back against him. In JESUS name.

Below is a breakdown of this verse in Isaiah, it really helps you understand the full context and contrast of these words.

shame - a painful feeling of humiliation or distress caused by the consciousness of wrong or foolish behavior.

disgrace - loss of reputation or respect, especially as the result of a dishonorable action.

rejoice - feel or show great joy and delight. inheritance- receive something at the death of the previous holder.

joy - a feeling of great pleasure and happiness.

“Instead of your shame you will receive a double portion in your land and instead of disgrace you will rejoice in your inheritance.”

We will receive a double portion and everlasting joy when Jesus takes over and we put the enemy and his lies to DEATH. Jesus is the only one who can bring us out of the quicksand that is shame.

My encouragement to you friend, whoever is reading this, is that NO ONE is EVER too far gone of God’s inheritance. No matter where your shame came from, the effects are still the same, the enemy is simply not that good, ya’ll. It’s time to take a step into the promises of GOD and throw off the blanket of shame. In Jesus' name.